Currently, Vie Cycle is located in Central New York, however, we are available to travel for group workshops, trainings, or special events.
​Interested in booking Vie Cycle? Send an email!

The Inspiration for Vie Cycle

Caring for the environment

Environmental impact has been a weight on my heart ever since I was twelve and decided it was time to make my school district ban disposable styrofoam lunch trays. Fighting to make school cafeterias more environmentally conscious influenced me to adapt my daily routines also. With sustainability in mind, I started cycling everywhere. It seemed obvious that this was the ideal mode of transportation. Not only was it better for the environment than driving, it was more efficient than walking, it strengthened my body and made me feel capable and empowered. My love for cycling took me in many directions, both literally and figuratively.
To sum up my research in a a few sentences: Women have a long history with bicycles and cycling needs women almost as much as we need cycling. Women are considered a "species indicator" for bike-friendly cities. That means that the prevalence of women on bikes is directly related to the quality of bike resources and infrastructure in a city. If you don't see a significant number of women biking in your hometown, then it's not doing enough to make cycling accessible. The other side of this is that women are movers and shakers when it comes to influencing changes. If more women are excited about cycling and feel empowered to bike more, we can start to transform the places we bike. But at the same time, biking can transform us by making us stronger, happier, more capable, and independent. 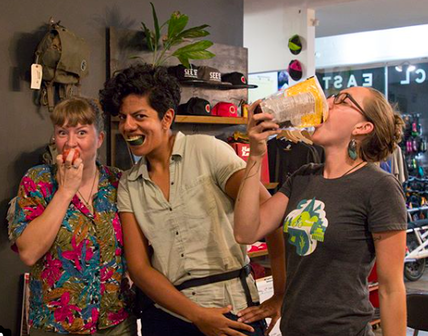 Instructors Calais, Nikita and Sylvie on a snack break. The Art of Bike Touring Workshop, August 2018.
Six bike cooperatives, three bike shops and two bike share programs later I was working at Switched On Bikes in Wellington, New Zealand as a mechanic and an electric bicycle tour guide. At the shop I was often approached by women who wanted to know how I learned to repair bikes. More than that, they wanted to know how they could learn more about their own bicycle. I decided to teach a four-day maintenance course exclusively for women and gender minorities. It was a bigger success than I imagined and we had to double the class size and get three instructors in order to provide the level of facilitation that we envisioned. From my own experience, I knew that learning to repair bikes was empowering, but the reaction from the students showed me that it could be life changing. They hadn't just learned about bicycles; by working together for four weeks they had cultivated competence, self-confidence, and a community with a genuinely encouraging learning culture. 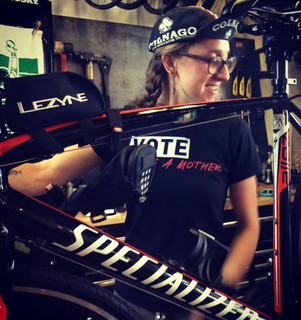 Sylvie realized her love of cycling when she was 13 years old, training for her first century (100 mile ride) with the AIDS Ride for Life. She learned about bike repair and culture at Pitzer College, where she received a BA in American Studies in 2010. Over the past 10 years she has worked as a mechanic at bike shops and collectives all over the USA and New Zealand. She co-founded the Ontario Wheelhouse (Ontario, CA, USA), The Big Red Bicycle Collective (Cornell University, Ithaca, NY, USA), Big Red Bike Share (Cornell University, Ithaca, NY, USA) and Wellington Wünderbike (Wellington, New Zealand). Sylvie has been a teambuilding facilitator with Cornell University's Team and Leadership Center since 2005 and worked as an Outward Bound Instructor in North Carolina in 2013.
In 2017, Sylvie developed a women's bike maintenance course in Wellington, New Zealand. A year later, during a two-month long bike tour in Patagonia she decided to start Vie Cycle.

Vie Cycle supports and partners with...